Today we await the birth of EFI, the next generation of token out of the pioneers of the ERC-1155 model and creators of Enjin Coin. EFI may not come immediately today, labor often takes longer than anticipated, but the metaverse waits to see what its arrival will mean for ENJ.

We’re used to release cycles in the world of tech. Apple comes out with a new phone every year, Microsoft with another edition of Windows. Each time the old model becomes obsolete.

Crypto is no different, in a sense, but there’s a bit more at stake when the product being updated is a currency. Crypto evolves so fast that institutions, like currency, that used to be static for hundreds of years now see turnover by the half decade. When that happens, an old coin with less utility turns to gold, as the expression goes, but with an updated meaning: The coin becomes antique, and banks on its previous value alongside systems already built around it.

Bitcoin’s blockchain is woefully outdated. It’s mostly useless to build on at this point with little utility, and its value is maintained primarily due to its being the first coin and the subsequent network effects.

In a way, the same is happening with ENJ. It’s quickly becoming the elder statesman of the Enjin ecosystem, previously nimble and versatile, the first of its kind to be used in tandem with the powerful ERC-115. With the announcement of Efinity and it’s EFI coin, ENJ is no longer the only token on the block, but Enjin maintains that ENJ’s role is still vital to the ecosystem. Its holders have many incentives and options to participate in the novel network.

According to the Enjin, EFI and ENJ will live in harmony, each with an integral role in the NFT assembly line. EFI will act as the main currency of the Efinity network while ENJ will continue being used to infuse NFTs, also becoming the major staking supply to feed Efinity’s collator nodes. How that works is essentially ENJ holders can nominate stable nodes (collators) who run the blockchain, and reap rewards of EFI for participating in the selection of reliable collators.

EFI will be the token used to essentially navigate the new ecosystem, and will become the backbone of all transactions deployed in the network. Traders will use EFI to pay the low gas fees, though most of the cost will be to “Maintain governance, nominate efficient network administrators, and encourage active participation in the network,” according to a recent blog post. It’s the utility token of Efinity in the same way that ENJ was the utility of Enjin’s marketplaces and apps when they still ran on Ethereum.

It’s hard not to see ENJ as a relic of a 2017, Ethereum maximalist mentality made famous by visions of an infinite machine and a world of nyan cats and doges. But crypto is nothing if not tumultuous, and a blockchain’s value and hype is quick to dissipate. That’s not to say Ethereum is over, far from it, but Enjin seems to be betting on interoperability and a parachain, collator-powered future that segregates crypto into its rightful niches.

“Efinity’s purpose is to be an NFT highway, not a general computing blockchain. Token creation, transfers and purchases are the network’s priority,” according to the Efinity whitepaper.

Through Ethereum, NFT minting and trading looks rather like a single lane road. Efinity’s network will be able to process thousands more transactions per second than Ethereum (a recent announcement put the number at 12K Txs with the help of transaction batching).

But that network needs stakers.

ENJ is the founder’s token after all, so Enjin wants to reward early users of the platform. Hodlers are being rewarded for staking in Efinity with generous EFI payouts. According to Enjin, 15% of Efinity’s EFI supply is reserved to reward collators and pools. Another big perk: if someone migrates their ENJ-minted NFT over to the Efinity chain, it’s automatically staked, and will receive some of the transaction fees just for being on the chain.

The two token model will be an exciting one to watch, especially with the release of Efinity, and the NFT.io marketplace it’ll power. It remains to be seen how the economy will look with the two standards operating in tandem, and if the staking rewards will be compelling enough for people to hold on and use their ENJ. 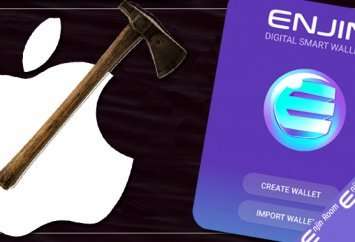